SMP Pr0n
Have a look at the image below if you are at all into computers like others on the Overclockers.com.au SMP Forums(more specific link for those of you with ocau logins) then you will realise this really is Pr0n for the SMP geeks...lol 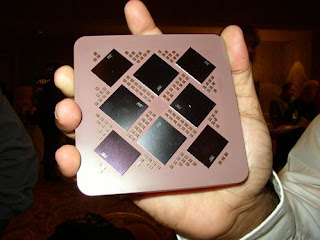 Can I say goddamn... gotta look at some of the specs of this thing, when I first heard of it I thought it sounded like the neural net processor out of the terminator series. 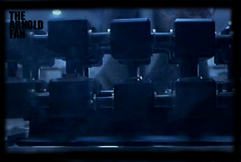 What with its individual processors all connected via a high speed bus, no not that kind of bus...lol
But the multi-processors, make the chip supposedly run cooler as a whole and make it scalable with current technologies so that it is in keeping with moores law. It also means with its massive 144mb of cache (a fact I learnt from the new article) that it can cache all instructions and SMP threads...drool. This model looks to have 8 processors on board each running at 1ghz, but that is not a real measure of this baby, the processors are supposed to interconnect with such speed and efficiency that the processors work more closely and as one, as opposed to current SMP (symetric multi-processor) systems such as AMD MP's/Opterons, and Intel Itanium/XEON's. Were talking the ability with this chip to perform equivalently to a pentium 6-7ghz... looks like IBM maybe back in the sadle so to speak now where can I get a 120mm square peltie/heatsink combo.
Basically though this goes back to the early days of intel when they toyed with this kind of technology, they had dual 486's running on a chip that had the equivellent power of a whopping 133mhz machine... interesting that IBM decided to revive it with impressive concequences.
The idea is that it is a fully scalable chip as single cpu's become smaller and cooler running they can be put on this chip to interconnect, the smaller they are the more can be fit on one chip the faster it becomes, one day we may all be running and rating computers in how many ghz processors we have on our chip. All I can say is funky.
Like the above article, gonna try and get it printed on zzz, been following this chip pretty closely and it sounds like an awesome leap forward in r&d...
Well one quick anecdote and then I'll go, one of my friends who shall remain nameless but has a blog in my links, should really learn to look before he leaps even no espeacially when people are watching/warning him to watch out for the tumultuos amount of water running through the guytter next to the door he is about to exit from.
Well peace out all.
Posted by Morgan at Monday, November 24, 2003